Measuring the effectiveness of lead gen programs is always at the top of a demand gen expert's list of priorities.  One of the gating factors happens to be out of their control -- what does the sales team do with a lead once they start working it?

In a previous blog article, I shared poll results showing C Level prospects being more than willing to take their first introductory appointment by phone.  Of their initial meetings with vendors, 58% were by phone and of those, 69% were "effective." 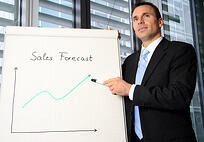 In general, it is becoming more the norm to begin a relationship by phone.  But what happens next? The outcome of meeting number one should be to have a follow-on sales activity.  What should be the goal for meeting number two?

For myself, I made it my goal over the past six months if an introductory call was going well to ask for a face-to-face meeting.  The next step in the sales process may be to present a quote or meet other decision makers, but by insisting on a face-to-face meeting, I was able to put my best foot forward and start building rapport at a level beyond what a second phone call could provide.  No hard stats to back it up, however: In Q1 of 2010 we closed the same amount of business as Q3 and Q4 of 2009, and in 2009 we grew by a factor of 3X.

Should that first meeting have been face-to-face?

I think not.  Of the appointments I took, roughly 4 in 10 resulted in that second meeting.  A third resulted in nurturing activities, and the remaining meetings were discarded as unqualified.  Making the first appointment by phone allowed me to avoid travel and time investment in the 60% that didn't result in immediate sales activity.

Should I have handled meeting number two by phone?

I've done it before; in fact, a majority of 2007 through 2009 was spent effectively selling with phone relationships. That said, I think that my best selling is when people get to meet me, in person, and can feel the integrity and passion that I bring to each project.

Should you add "meeting two should be face-to-face" to your demand gen SLA with sales in order to increase the effectiveness of the leads you generate?

If you are in a sales environment that eventually end up in face time, then I recommend it.  Have a qualfied criteria that defines which opportunities move to the face time requirement, but definitely consider adding it. The Internet and increased communications tools could be holding back your conversion rate.

Have you seen our webcast replay of The 10 Pillars of an Ideal B2B Demand Gen Platform on Focus.com?